i have been riding this Vision R40 for a couple of years now and it is most comfortable bike I've ever ridden. 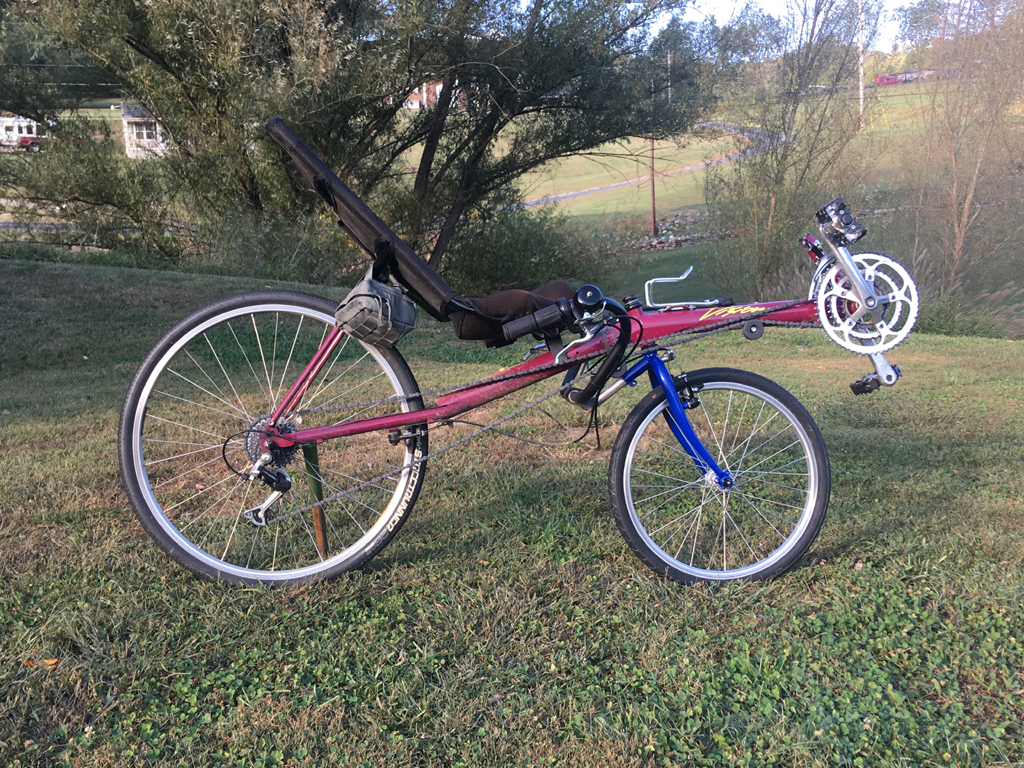 Last edited by Banshee on Tue Oct 17, 2017 5:16 pm, edited 1 time in total.
The devil danced as he went down, in the hail of arrows comin' Out on the wild Montana ground, Custer died a-runnin'.
Top

I'm an avid cyclist/ daily commuter myself. I like semi-recumbent OK, but I'm leery of full recumbents. Mostly because in Texas there are some really incompetent drivers on the road, and to my mind, you're just too low to the ground, less visible. Very many recumbent riders around here use blaze orange pennants on their recumbents for this reason.

I like bicycles a lot, and my wife and I have so many in the "stable" it's approaching the firearms proliferation in the safe!

She just got into a Pashley not long ago, which really slows things down on a group ride.

These days I'm commuting on a 2-speed SRAM automatix-equipped bicycle with a coaster brake and my "Burley Travois" bicycle cart. I'm on a weirdo "simplicity" kick of late... No wires, cables, excess parts, etc...

Maybe it's because my knees are creaky but I still want to vamp around in skinny jeans on a bicycle that resembles a so-called "fixie" and faurkt screams "hipster douche!"

I've heard a lot of riders say that about recumbents being to low,I understand that but I've had more close calls with cars while riding a standard diamond frame bike than the recumbent. Some assholes just don't like bicycles on the road and will get close to you and try to scare you. Just to be on the safe side I don't ride on a busy street/highway. I like to ride a back road that isn't much more than a glorified goat trail. I may see two or three cars or farm tractors on it. Recumbents are kinda rare here in Northeast TN/Southwest Va and seems to draw a lot of attention. The biggest problem I had when I started riding it was people driving along beside of me looking and/or making pictures. Some even wanting me to stop so they can look at it. All of them are surprised to hear that it is 21years old.
I'm not convinced that flags help, anyone who isn't paying attention and doesn't see the bike isn't going to see the flag.
Dogs can be a problem, I carry an 18 inch aluminum "fish" bat to help change their minds. The bat will ring like a bell when I drop it on top of their heads.Usually after the second ring they will decide I'm not worth the trouble. Some still come out and run along beside me and bark, but stay far enough away so I can't reach them with the bat.
I put over 2000 mile a year on it, plus I also ride a mountain bike.
The devil danced as he went down, in the hail of arrows comin' Out on the wild Montana ground, Custer died a-runnin'.
Top

In some of that rolling Piedmont country in the Carolinas, I could see the appeal of a flag just because some motorists tend to go fast on the turning, twisting roads.

Good on you for finding the "roads less traveled." My wife and I have done a few "micro excursions" on back roads out to small towns and the like, but as a rule we're always cycling in the city. The day after tomorrow, for example, a new craft brewery is opening and there is a discount for people who show up on bicycles. I've done a few charity rides now and then too. Lots of great bicycle terrain here along rivers. I've also gone on bike rides in Germany way back when, or even just brought a bicycle for transportation in Germany and in Latin America. I was in Helsinki some months ago, and they've got a bike share program, which was really convenient to use.

Here in Texas there's a huge problem with feral dogs, or dogs being left to run loose. On the bicycle they sure become dogs again! I've taken to out-running them for the most part. In a few cases when I can't, I've dismounted and sometimes that calms the canines back down. I've thrown little "pop rocks" from a water bottle cage to scare them away, but usually I just yell. I had a fellow cycling enthusiast acquaintance actually get bit. He had to undergo the full treatment for rabies and so on.

I've gone on a few "tweed ride" charity rides for Christmas, and one nut brings out his "penny farthing" to ride around. That sure gets folks snapping photos that is for sure!

As I age and my back starts to go the way of my knees, I just might have to give the recumbent a try!

"Keep the rubber side down!"

This is my Actionbent recumbent!

How well does it ride?
The devil danced as he went down, in the hail of arrows comin' Out on the wild Montana ground, Custer died a-runnin'.
Top

Ya, mine has under seat steering. It keeps your arms in a more natural position, but it does take a little getting used to.
The devil danced as he went down, in the hail of arrows comin' Out on the wild Montana ground, Custer died a-runnin'.
Top

To be honest, it is a little twitchy! But I have found it to be a pretty fast ride!
Top
Post Reply
9 posts • Page 1 of 1