Which extension is slightly past bbl end?
Are they all created equal?
I've had a nordic on a benelli I don't know anything about Choate. I know there are others.
Thanks
Friends dont let friends buy mossberg
Top

There are a ton of extension options for the 870. What length is your barrel?
My YouTube Channel
Remington 870 Tips & Tricks
Shotguns 101
Top

870Ps can be had with a variety of barrel lengths.
My YouTube Channel
Remington 870 Tips & Tricks
Shotguns 101
Top

Yes it's 20"
Should I stick with rem extension or nordic or are Choate or the others just as good?
Friends dont let friends buy mossberg
Top

+3 will be flush with the barrel

For a 20" barrel, a +3 kit is generally going to match. Sometimes, you can tweak a +3 kit into a +4 with the right internals and shells.

The Remington factory +3 extension is a good kit. I have it and like it. It's a 2-piece design that needs a bracket, so make sure you have the correct one for your barrel spacing. As a 2-piece, it's better for an install-and-done fighting build, rather than a multipurpose gun that you'll be reconfiguring often. Not a ton of internal space, but they're good for +3 with 2.75" shells, and are designed to prioritize reliability. The Remington extensions are a military design, so there is a bayonet end cap that'll stick out past the end of the barrel about a half-inch. This won't hurt anything, but some folks don't like the way that looks. 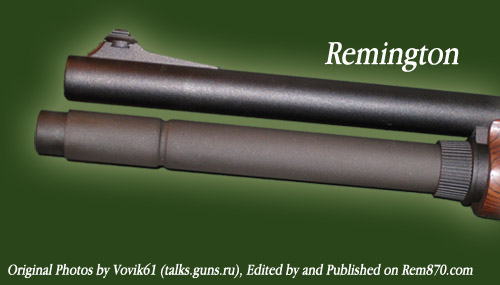 S&J Hardware makes some really great single-piece extensions. I've been reviewing one of their MK II +2 kits, and I'm really impressed. They say the +3 version is designed to line up with a 20" 870 barrel, you can email them if you want to know the exact length. They're not the cheapest option, but they're really tough and well-designed. Excellent reliability and good internal space.

Choate's +3 is another single-piece kit. I have one here for evaluation, but I haven't really played with it much. Seems to have potential, though. I can say that it'll line up with a 20" barrel nicely, and it has good internal space. You can tweak this one into a +4 if your shells aren't crimped too long. It's more of a budget kit, which isn't necessarily a bad thing depending on your needs, but it's not built as heavily as some other options.

Wilson Combat extensions are really great budget kits; tough, reliable, with some nice extras and an array of options for sling attachment points to choose from. I normally recommend these for budget builds because they're really affordable and all you give up for the low cost is a bit of refinement and some minor side features, but they're only made in +1 and +2 versions. Still might be worth considering, unless you're really set on a full-length mag (though keep in mind that a longer tube with more shells will also add weight).

I haven't used the Nordic extensions personally. They're modular all-aluminum kits, and are really popular with competition guys. May not be the best choice if your 870 is going to see real rough use, since they don't use a really high-strength aluminum alloy, but they should work fine for HD. Like a lot of high-end competition gear, they're on the expensive end of the scale.
My YouTube Channel
Remington 870 Tips & Tricks
Shotguns 101
Top

Most excellent reviews
.
Any of those test units for sale lmk pls

It's certainly not fancy. Came with a side saddle too

I'm a fan of the Remington extensions. I run a +3 on my 20' and its never let me down! A bit pricey, got to have a tool of some kind handy, stud rattles a little..but the durability, bayonet mount, and good track record with the law and the military make up for any downsides in my eyes..
Top
Post Reply
12 posts

Users browsing this forum: No registered users and 5 guests